Home » 3 Deaths Prompts IKEA To Recall 35.6 Million MALM and Other Models of Chests and Dressers 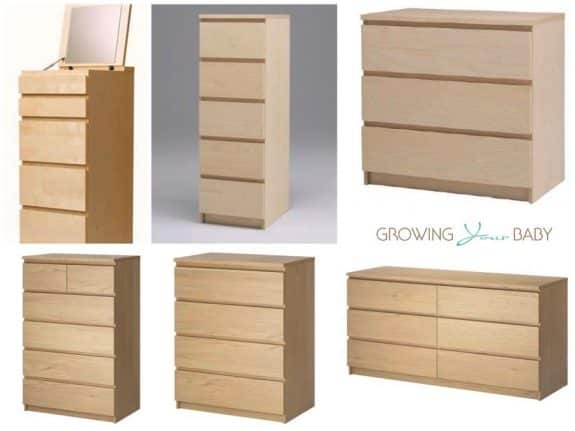 ?  In February 2014, a 2-year-old boy from West Chester, Pa. died after a 6-drawer MALM chest tipped over and fatally pinned him against his bed.

?  In June 2014, a 23-month-old boy from Snohomish, Wash. died after he became  trapped beneath a 3-drawer MALM chest that tipped over.

Subsequent to the July 2015 announcement, CPSC and IKEA learned of additional tip-over incidents, including a February 2016 incident in which a 22-month-old boy from Apple Valley, Minn. died when a MALM 6-drawer chest fell on top of him.

None of the chests or dressers in the above-listed incidents had been anchored to the wall.  In addition to the three deaths, IKEA received reports of 41 tip-over incidents involving the MALM chests and dressers, resulting in 17 injuries to children between the ages of 19 months and 10 years old.

The MALM chests and dressers are constructed of particleboard or fiberboard and are white, birch (veneer), medium brown, black-brown, white stained oak (veneer), oak (veneer), pink, turquoise, grey, grey-turquoise, lilac, green, brown stained ash (veneer), and black.  A 5-digit supplier number, 4-digit date stamp, IKEA logo, country of origin and “MALM” are printed on the underside of the top panel or inside the side panel.

Since 1996, IKEA chests and dressers have been labeled to identify IKEA, the model name and the manufacturing date.

IKEA also received 41 reports of tip-overs involving chests and dressers other than MALMs, resulting in the deaths of three children and 19 injuries to children:

Most of the non-MALM chests and dressers included in this recall are listed on the IKEA website at www.IKEA-USA.com/recallchestsanddressers.

Since 1996, IKEA chests and dressers have been labeled to identify IKEA, the model name and the manufacturing date.

To receive a refund or free wall-anchoring kit for IKEA chests and dressers listed above, visit an IKEA retail store, go to www.IKEA-USA.com/recallchestsanddressers , or call 866-856-4532 anytime.

A child dies every two weeks and a child is injured every 24 minutes in the U.S. from furniture or TVs tipping over, according to CPSC data.

Consumers should immediately stop using any recalled chest and dresser that is not properly anchored to the wall and place it into an area that children cannot access.  Contact IKEA for a choice between two options: refund or a free wall-anchoring repair kit.

Consumers can order a free wall-anchoring repair kit. Consumers can install the kit themselves or IKEA will provide a one-time, free in-home installation service, upon request. Consumers can reorder the kits throughout the life of their chest and dresser.