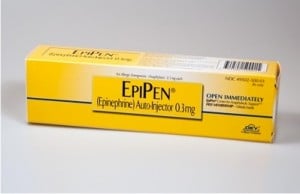 About half of all food allergy sufferers will experience a life-threatening reaction at some point in their life. Because of the potential severity of reaction, individuals with severe allergies are provided with small injectors, otherwise known as EpiPens, that administer just enough epinephrine (a medication that can stall an allergic attack) to counteract the effects of an allergic reaction. In a severe reaction, the medication can mean the difference between life or death. Unfortunately, a recent study found that parents who have been given epinephrine shots for their infants are struggling with administering the shots when needed.

For the study, researchers followed more than 500 infants with known or suspected food allergies to egg and/or milk for a total of three years. All children were between the ages of three and 15 months at the onset of the study.

Parents of the children were told about the allergies, were educated on how to avoid trigger foods and had been given an injector in case an allergic reaction should occur. Yet despite the information they had been given, as many as 72 percent of the children experienced an allergic reaction during the course of the study. Another 11 percent experienced a severe reaction, which can include difficulty breathing, hives, swelling and a drop in blood pressure.

“the less is, it’s very important to be very vigilant,” said Dr. Schott H. Sicherer, an expert  in childhood allergies at Mount Sinai School of Medicine in New York, who worked on the study. “We as the physicians have to make sure we educate the parents.”

According to the study, only one-third of all children who experienced an allergic reaction received an epinephrine shot. Parents cited not recognizing the reaction, not having the drug at hand and being too afraid to administer it as reasons for failing to give the much needed shot. But that fear could cost a child it’s life.

“The children who should have received epinephrine in our study did not go on to die, luckily, bit it is a risk when the reaction is not treated promptly,” Sicherer said. “We need to emphasize to families that this is a safe medication. If they are in doubt, they should give it anyway. Nothing bad will happen from that.”

“I think people have a hard time getting over the hurdle of a shot, but it is a very small needle,” said Dr. Kari Nadeau, an allergy expert at Stanford University School of Medicine who was not involved in the study. “It’s key that people should carry the EpiPen and feel free to use it as appropriate – it’s the only lifesaving medication.”