Wholly schmuckers! An Indonesian woman has given birth to a 19.2-pound baby boy, the heaviest newborn ever recorded in the country. 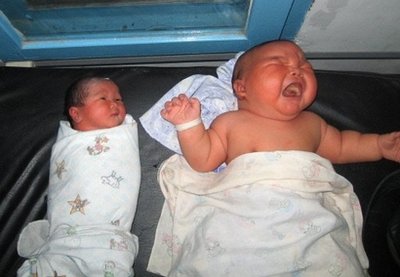 The baby, who is still unnamed and 24.5 inches long, was delivered by caesarean section Monday at a public hospital in North Sumatra province.

“This heavy baby made the surgery really tough, especially the process of taking him out of his mother’s womb. His legs were so big,” Binsar Sitanggang, a gynaecologist who took part in the operation said. 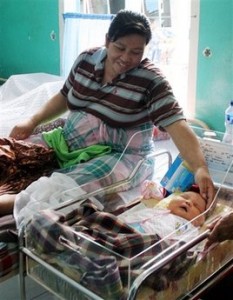 Despite having to initially be given oxygen to overcome breathing problems, the boy is in good condition.

“This baby boy is extraordinary, the way he’s crying is not like a usual baby. It’s really loud.”

The boy’s massive size was likely the result of his mother, Ani, 41, having diabetes.

At nine months, she had to be rushed to hospital due to complications with the pregnancy. The baby, her fourth, was the only child not delivered by a traditional midwife.

When a diabetic mother’s glucose level is high during pregnancy, the baby can receive too much glucose and grow too large, according to the American College of Obstetricians and Gynaecologists.

Indonesia’s previous heaviest baby, weighing in at 6.9 kilos, was born in 2007 on the outskirts of the capital Jakarta, according to the Indonesian Museum of Records website. 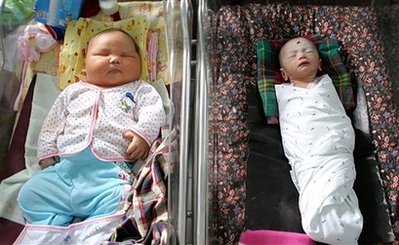