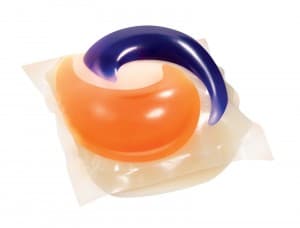 This year alone, more than 5,700 children under the age of 5 have been exposed to the chemicals found in concentrated liquid detergent packages. Most children just lick them, get a taste and then realize that it’s not a tasty candy. But others have experienced enough exposure to be hospitalized, suffering from loss of consciousness, excessive vomiting, drowsiness, throat swelling and difficulty breathing. One little boy, a 7-month-old from Florida, has just died from ingestion.

“With young children, any household product is likely to end up in their mouth,” Dr. Cynthia Lewis-Younger, the Florida Poison Information Center’s medical director told CTV News. “Parents know that things in the house can be dangerous and they call for advice. And [in] many of those cases, we can reassure parents.”

That wasn’t the case for little Michael Williams. The boy was transported from a shelter for abused women to the hospital on Friday afternoon. According to Kissimmee Police spokesman, Captain Warren Shepard, Michael was said to be “in some distress” at the time of transport. An hour later, the little boy was pronounced dead.

The Florida Department of Children and Families told CTV News that they had a prior history with Michael’s family, but because of privacy, they were unable to release any further information. And while no charges have been filed, local police officials declined to make any further comments regarding the case, since it is currently under investigation.

“While we have the cause of death, we just don’t know if it was as a result of abuse or neglect, which prevents us, at this point in the investigation, from opening the records or giving out any detailed information about our involvement with the family,” DCF told CTV News in a statement on Thursday. “We continue to work with law enforcement as the investigation moves forward into the circumstances surrounding the poisoning.”

“The death of little Michael is a tragedy,” the DCF statement said. “It reminds all of us parents of the dangers of leaving household cleaning supplies around our little ones.”

“People are not listening to the warnings,” Ruck told CTV News. “Last year, at about this time, there were quite a few issues relating to this.”

It is because of these continued cases of ingestion that Proctor & Gamble Co., the makers of the orange-and-purple Tide Pods, started their Safe Home campaign. The idea is to help “educate consumers on the correct use and storage of household cleaning and fabric care products.”

In addition, the company has been working to make the storage container of the detergent pods harder to open; the new, double-latch lid and opaque container rolled out earlier this year. They are hoping that, by keeping children from seeing what’s inside easily, they can deter them a bit from even wanting to open the package in the first place.

“We are seeing more consistent warning labels and some companies move to opaque packaging,” Scott Wolfson, spokesman for the Consumer Product Safety Commission, which “has been working on this issue for quite some time.”

But Commission Chairman Inez Moore Tenenbaum says there needs to be more, including safer packets from ALL laundry detergent package makers, as well as comprehensive safety standards.