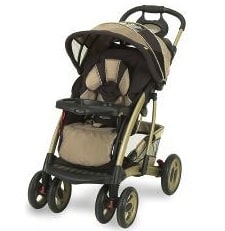 It feels like almost daily we are barrage you with recalls on popular cribs, Play yards, toys and strollers. Many just for part replacements, but all for serious reasons that could harm or even kill your child. For this reason, it is not recommended that you purchase baby gear second hand until you research whether or not it has been recalled.

Tragically a six-month-old baby was found dead on Monday in a stroller that was recall last year for entrapment and strangulation risks.

Alvin Smucker was sleeping in the stroller when his mother checked on him and noticed he wasn’t breathing. It is believed that the baby wasn’t harnessed and he slid between the tray and the seat and became caught.

The baby was rushed to a close by Hospital, where doctors pronounced him dead.

The stroller Alvin was sleeping in, the Graco Quattro model 7111BKW,  was purchased at a garage sale and was recalled by the U.S. Consumer Product Safety Commission (CPSC) in October.  At that time the CPSC reported that there five reports of infants becoming entrapped, resulting in cuts and bruises, and one report of an infant having difficulty breathing. The recall noted that “entrapment and strangulation can occur, especially to infants younger than 12 months of age, when a child is not harnessed.”

The CPSC stated that the tray can trap an infant, and those infants who become entrapped at the neck are at risk for strangulation.

Graco offered a repair kit to parents who owned the Quatro stroller, Quatro Travel system, Metrolite stroller and Metro Travel system to help prevent further injuries.  It is worth noting that if your child is harnessed this is not an issue.