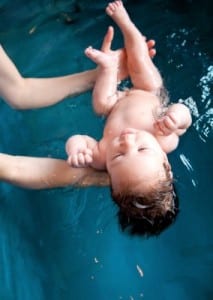 Drowning is the leading cause of injury death for children between the ages of 1 and 4. According to the Centers for Disease Control and Prevention, three children die each day from drowning. Kim Moore’s daughter was nearly one of those children.

Kim and her daughter were going for a walk around a lake in Colorado when her then two-year-old daughter fell into a sinkhole. Her mother was able to pull her out and save her life, but the little girl was traumatized. Had her mother not decided to enroll her into an Infant Swim Self Rescue Class.

“My daughter didn’t’ know how to swim and was not comfortable in the water after that experience,” Kim said. “In less than four weeks, she was able to save herself fully clothed,” Kim said.

And Kim isn’t the only parent to have used a survival swim class. Parents have enrolled their children in these classes for almost 50 years now. The original initiator of the program, Harvey Barnett, started the course because a neighbor child of his nearly drowned. To date, the program has almost 1,000 documented cases in which the program has been successful at helping a child save themselves from drowning.

In the survival swim classes, young infants intentionally fall into the water (although sometimes they are pushed by their parents). But then the interesting factor comes into play. These small children then use their legs to kick their heads above water and then roll onto their backs to float to safety.

Dr. Mary Evelyn O’Neil, a pediatrician at Wake Forest Baptist Medical Center in North Carolina says that evidence has shown that children between the ages of 1 and 4 are less likely to drown if they’ve had formal swimming lessons. Unfortunately, those studies are very small and they fail to determine which techniques are beneficial.

But not everyone supports the movement. In fact, the American Academy of Pediatrics has been wary of the technique for years. Part of that is due to the fact that there are some potential health complications.

“Certainly splashing around a pool is fine,” O’Neil said. “[But] if they swallow too much water it can lower their sodium levels in their body and that can be dangerous.”

But the biggest concern isn’t necessarily the swallowing water problem. Pediatricians are highly concerned that parents and children will develop a false sense of security: either parent or child may assume that, since they can save themselves from drowning, they may be left unattended around water. So, while they do think it’s a good idea for children to know how to save themselves from drowning, they caution parents to understand that the skill is not a substitute for parental supervision.

“The harm may be the false sense of security that an infant can save themselves at drowning,” said Dr. Joseph Gigante, associate professor of general pediatrics at Monroe Carell Jr. Children’s Hospital at Vanderbilt University. “Just because they can perform in front of an instructor doesn’t mean it can prevent drowning.”

“It must be stressed that even advanced swimming skills will not always prevent drowning and that swimming lessons must be considered only within the context of multilayered protection with effective pool barriers and constant, capable supervision.”

The American Academy of Pediatrics also stresses that all children develop differently. Because of this, it may be difficult to know which children will benefit from early swimming lessons. As such, parents need to consider swimming lessons and survival swim classes on a child by child basis.

“A parent’s decision about starting swimming g lessons or water-survival skills training at an early age must be individualized and on the basis of child’s frequency of exposure to water, emotional maturity, physical limitations, and health concerns related to swimming pools,” said the AAP policy statement.

Parents should also know that the classes are not available to children who cannot sit up or roll over. These milestones play a big part in making the survival swimming technique successful.

In the end, I don’t think the classes are necessarily a bad idea, as long as parents know that their children still need to be monitored around water. That false sense of security could prove to be deadly and it’s certainly not worth the risk.