Dawa Titung, a seven-year-old boy from Nepal, missed out on the coddling, carrying and snuggling most young infants receive from their parents, but it had nothing to do with an unwillingness or lack of desire on his mother’s part – she just couldn’t lift him up.

Dawa was born with a condition known as hydrocephalus. It is a medical condition in which the space between the brain and skull fills with too much fluid. To accommodate that extra fluid, the skull grows much larger than normal. And because the skull is made from bone, it can add a substantial amount of weight to a child. Phool Titung, his mother, said she needed help just to lift the little boy out of bed.

“His head was very big. It was very hard to take care of Dawa,” she said, with the help of an interpreter.

About one in 500 children are born with the condition, and if treated early, doctors can simply shunt the excessive fluid into other parts of the body. The skull will not grow to an excessive size. Unfortunately, Nepal is a country where medical care and doctors are difficult to come by. Because of this, little Dawa’s condition went untreated. 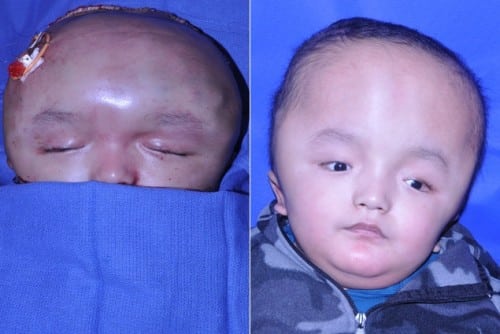 For years, the family endured the difficult care, loving their son through it, but burdened by it all. Poor little Dawa couldn’t even hold his own head up because it was too heavy. To add to the problem, they got looks and stares from strangers. Then one day, a missionary doctor visited their region. He told Dawa’s parents that treatment from U.S. doctors could be made available to them.

Without hesitation, Dawa’s parents accepted the offer and brought him into Johns Hopkins Children’s Center in Baltimore. Dr. Amir Dorafshar, the plastic surgeon who helped perform Dawa’s operation said he had never seen a child with a head as large as Dawa’s; he sympathized greatly with Phool.

“His mother was unable to do all the things that a mother should be able to do,” Dorafshar stated. “Our goal was to help his family care for him more easily.”

Several doctors, including Dorafshar, would work on reducing the size of Dawa’s head. Unfortunately, there were many risks to the surgery. Doctors surmised that he had only a 50 percent chance of making it through the surgery alive, but even without the surgery, Dawa might still die at a young age because of the condition itself. So surgeons had to try and find a way to reduce the risks in order to save Dawa’s life and give his family a better quality of life.

Here was the problem: directly underneath the skull are some rather large blood vessels. Those vessels provide blood to the brain. One slight mistake and any one of those vessels can be cut. The amount of blood lost could ultimately result in death, but in order to reduce the size of the skull, they would have to cut out large portions of hard skull bone.

Dorafshar and his colleagues thought that they might be able to reduce the risky creating a computer generated model and brain imaging plan of Dawa’s brain and skull. That model would give them a structure to practice on before the actual surgery. The knowledge they gained during the simulated surgeries would help them know where to cut and how to resize Dawa’s head once the skull was completely removed.

“We were able to practice the surgery at our desks before we ever got to the operating room,” Dorafshar said.

And it seems that all of that practice paid off.Dorafshar and neurosurgeon Dr. Edward Ahn worked together at removing Dawa’s skull from just above the eyebrows and all the way to the base of the neck.

“We did a lot of homework beforehand, so we were very confident in making openings and cuts inside the skull,” stated Ahn.

Dorafshar then used the blueprints they had created from the simulated surgeries to trim “huge amounts of bone” from the skull. They resized and reshaped the skull and used plates and screws to make it all fit back together over Dawa’s brain. In total, the surgery took about 12 hours.

After two weeks of recovery, Dawa and his parents returned home. The little boy made it through the surgery safe and sound, and a little lighter. He does still suffer from some developmental delays from his condition, and his head is still larger than most children his age, but things are definitely better for the Titung family.

“Now it’s easy to lift him, carry him from one place to another,” said Phool. “I can do that by myself. I am very thankful.”

Dr. Reid C. Thompson, chairman of neurosurgery at Vanderbilt University, said that computer modeling is a new and innovative way to treat advanced cases of hydrocephalus cases like Dawa’s. Thompson also believes that this type of surgical technique may soon be used in other types of surgical procedures in the future, and that it may help make operations faster and safer for patients.

“It’s kind of changing the way we think about what we do as surgeons,” said Thompson. “Computer modeling really is the way of the future.”