A few months ago Mothering Magazine decided that the world needed a Breastfeeding Icon. They launched a contest to have regular people design the logo that they would support as the “International Breastfeeing Icon”.

Of the 500 entries that were submitted they were narrowed down to 12 semi-finalists. The criteria for selecting the final image included public voting, votes of the major breastfeeding organizations, as well as design and reproduction standards. 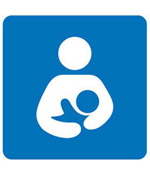 The purpose of an international symbol for breastfeeding is to increase public awareness of breastfeeding, to provide an alternative to the use of a baby bottle image to designate baby friendly areas in public, and to mark breastfeeding friendly facilities.

Of course, breastfeeding does not require a special place and is appropriate—as the Canadian government’s slogan says—”anytime, anywhere.” The purpose of the symbol is not to segregate breastfeeding, but to help integrate it into society by better accommodating it in public.

For example, sometimes there are no chairs in public, sometimes nowhere to change the baby, or for the mother separated from her baby, nowhere to plug in an electric breast pump. Mothers welcome quiet, private places in public where they can collect themselves and their children. The symbol could designate these kinds of places.

In addition, businesses could use this symbol to designate a lactation room, required now by law in California. Restaurants could use the image to let moms know, “Breastfeeding welcome here.” They have already heard from a new airport and a university interested in using the symbol. When you see this new symbol in use, please let them know, and if possible, send them a photo.

I love the symbol that was chosen. It conveys the breast feeding message very clearly and elegantly. We don’t need to see the boob to know what is happening, we just need to see the baby on the sign is in the feeding “area”.

The Gentleman, Matt Daigle, who designed the sign is a new dad to 1 year old Hayden. He recounts this great story about the time his wife had to breastfeed on an airplane. Which is very fitting after the story I just posted.

The most awkward experience we had breastfeeding in public was on a four-hour flight to visit my family. The airline had my wife and I in separate seats (with my wife in a middle seat), even though we had booked our tickets months in advance. My wife and I pleaded with the airline explaining to them that it would be very difficult for my wife to be discreet and breastfeed our son if she was seated between two passengers. The airline would not budge. So when we boarded the plane a wonderful man from Minnesota gave up his seat (that he paid extra for just to sit by a co-worker) so that I could be with my wife and she could breastfeed Hayden more discreetly. The plane was very hot so my wife could not cover Hayden with a blanket and feed him—so I basically had to hold up the blanket so they could have air. My wife told me Hayden was making these loud sucking sounds and was saying “Mmmmmmm” as in “Yum, Mom” the whole feed—it was hilarious.