Transitioning your baby over to solid foods can be fun and exciting. It can be adventurous and entertaining. But it can also be frustrating, confusing, and even scary. Thankfully, there are a few hard and fast rules to guide you, as well as some tips and tricks to get you through. 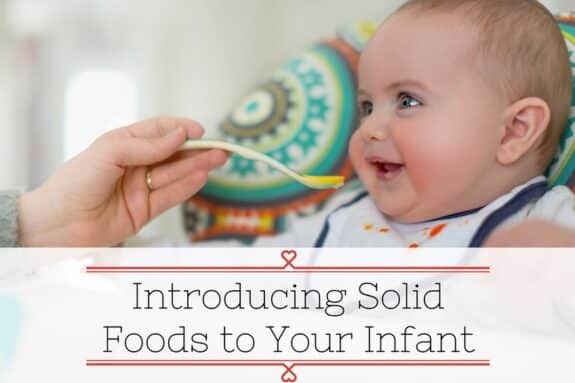 Although mothers of the past (and present) start babies on solids at five, four, and even three months of age, this is not recommended by health and wellness organizations. Instead, the American Academy of Pediatrics and the World Health Organization both recommend exclusive breastfeeding until babies have reached at least six months of age. If this is not plausible or feasible, then baby should be exclusively formula fed until that time.

Much of the reason for this guideline is related to the baby’s development. Gut bacteria, which is still forming, may be altered or hindered by introducing solid foods too early. Babies may not have adequate head or neck control before six months of age, which can place them at risk of choking. Furthermore, studies indicate that babies may be more prone to increased weight gain and adiposity during infancy and childhood – and resulting consequences of these conditions could ultimately carry on into adulthood.

Perhaps one of the most important safety tips for introducing solid foods is to do so slowly. Do not simply hand baby something and hope for the best. Never leave baby alone while feeding, and try to wait a few days between adding new foods so that you can watch for signs of allergic reaction. Parents are also encouraged to introduce new foods often. It is perfectly normal for baby to struggle with a food the first few times, but continuously offering them can help expand baby’s palate.

Transitioning to solids is a highly personal thing. Every family does it differently, based on their parenting methods, core beliefs, and personalities. For example, some parents prefer baby-led weaning, while others prefer strained and pureed foods. Still, there are others that do something that’s a little in between. If you’re still not sure which method you would like, consider the following points:

Baby-led weaning, which is essentially letting the baby decide when solid foods should start (which may occur after six months of age), may reduce the risk of choking. However, doctors and health organizations are a little concerned that baby-led weaning could lead to low iron – particularly among babies that are exclusively breastfed (formula contains added iron). Unfortunately, there aren’t enough studies on baby-led weaning yet to give us any real or hard answers, but we do know that babies need more iron once they hit about six months of age.

If you are going to do baby-led weaning, please know that you must start with extremely soft foods. They need to be foods that baby can mash on their own, between their fingers or in their mouth. Foods should not contain skins, rinds, shells, or other items that may lead to choking. Also, please be sure to monitor the baby at all times – even as they start feeding themselves.

Parents who prefer strained or pureed foods typically begin right around six months of age. Some make their own food using special blenders, food processors, canning jars, or ice cube trays and whole, organic ingredients. Others simply purchase their foods from the store. No matter which way you go about it, make sure you start with a smooth, slightly runny consistency. Babies need to start with foods they can swallow easily. Then, as they start doing better, you can move them to thicker consistency foods (up to about the consistency of pudding), then to soft, easily mashable foods. For those using canned foods at the store, these would be “Stage 3” foods. For those making their own, think super soft potatoes and carrots, almost mushy broccoli, well-cooked peas, etc.

Should You Give Infant Cereals?

Fortified infant cereals have been used for a couple of generations, and were once thought to be a staple food in the infant diet. Now there’s a lot of confusion over whether they should be given or not. First, there are concerns over whether babies can digest grains (rest assured, most can, but exceptions may exist in babies with allergies and other serious health conditions). Secondly, there is the matter of arsenic, which has been found in the urine of babies who eat fortified rice cereal. In this area of concern, parents can simply avoid rice cereal and, instead, go for oats, wheat, or barley cereals. Parents can also choose whole grains over refined ones (which we actually stand behind here at GYB), and they can opt for organic or homemade cereals over commercial ones. In short, yes, you can give your baby cereals – but the decisions regarding if and how are completely up to you!

Stay Away from Sweets and Sodas

Parents often enjoy handing over their favorite desserts, sodas, and treats. Unfortunately, doing this can increase baby’s risk of excessive weight gain. It can also disrupt baby’s food exploration. You see, babies tend to maintain the dietary habits they start off with early in life. Because of this, parents are encouraged to avoid sweetened foods and drinks (including fruit juices), and should, instead, encourage a variety of fruits, vegetables, grains, legumes, and pureed meats. In other words, try to as closely mimic a healthy diet now so your baby is ready for all the wonderful foods that life has to offer them.