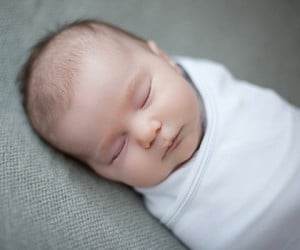 Moms have been swaddling newborns for centuries. In many hospitals, a nurse swoops in after a woman gives birth, swiftly wrapping the squirmy tot into a baby burrito.   There are many benefits of swaddling including:

We were advocates of swaddling with our first son and we certainly can attest to the benefits so with the arrival of our second we hoped our newest addition would adopt the same behavior.

I was fortunate enough this time around to be introduced to the Nested Bean – Zen Swaddle.

Designed to mimic a parents touch, the Zen swaddle is unlike other products as it has lightly weighted areas that gently apply pressure to your infant’s sides and centre to mimic the comfort and security that they feel when they are being held.  Touch or simulated touch is medically proven to calm babies by triggering a self-soothing response thus improving an infants’ ability to regulate stress.  The Zen Swaddle was developed to combine the benefits of swaddling and touch to provide a safe, secure environment for your baby. 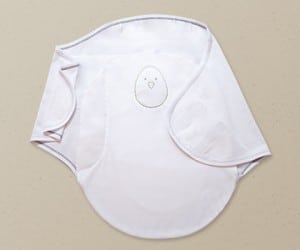 Upon receiving the wrap the very first thing I noticed was the light weight material and the cute little weighted chick on the centre.  It’s important to ensure that your infant doesn’t get too hot while they are sleeping so it was wonderful to see that Nested Bean took careful consideration when picking their 100% cotton textiles.

New parents will love that the Zen Swaddle comes with instructions that include great pictures that are clear and very easy to follow making swaddling your baby very easy.

With both of our boys we found that they didn’t particularly like the motion of getting swaddled, which as new parents initially made us believe they didn’t like the swaddle – however with both of them, once they were wrapped they quickly calmed down and we certainly found that swaddling helped us. 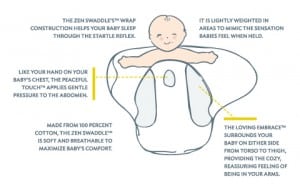 The Zen Swaddle is designed with a built-in pouch for babies smaller than 23” and younger than one month.

It’s been designed so that baby’s arms can either be inside or outside the swaddle – we personally found that inside worked better for us.  Having his arms outside meant that if he had an jarring movements with his arms it would still startle him a little – but it really is a personal preference. 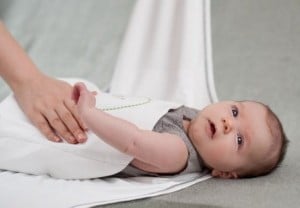 Created with velcro sides that ensure it stays safely snug on your baby, the Zen swaddle applies gentle pressure on the sides and on their chest to feel like your wee one is being held.

We all know babies can be messy – accidents and spit-up’s do happen so it’s important (for me anyway) that the baby gear I use can easily be cleaned.  I was a little concerned that the swaddle may not wash well because of the weighted section but I was pleasantly surprised that it can be washed frequently. The garment’s construction ensures filling stays in place through repeated washings. To protect the quality of fabric, they do recommend washing in cold water, on a gentle cycle and drying using low heat.

Nested Bean has reports from parents that their infants are sleeping up to two hours longer at a time, our experience would be similar for sure.  Our son slept well and certainly for longer periods of time – which made me one happy mama.

Designed for children 0-4 months of age (7-14lbs), I certainly found the Zen Swaddle by Nested Bean to be different than other swaddles on the market.  When put to the test their design stood up to their claims for safety, comfort and longer sleeps.  Available in four designs and retailing for $39.99 makes it a little more expensive than other swaddles I’ve used – but I can attest that it’s also worked better making it worth the extra money.  Whether for yourself or as a gift I’d recommend the Zen Swaddle.