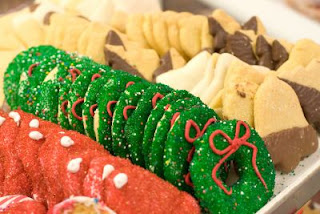 As holiday parties get into full swing many will parents stress about the amount of sugar their children will be consuming. Candies, cookies, and cakes will be in full supply, leaving them to dread the “sugar high” that could follow.

However, according to researchers there is no such thing as a “sugar high”. The Journal of the American Medical Association looked at 23 studies done on sugar consumption by children and found no connection between sugar and hyperactivity. One study shown parents who thought their children had consumed sugar were more likely to label their children more hyperactive.

This does not mean that parents should allow their children free-rein on the holiday cookies. Many of the sugary foods children consume also contain several artificial dyes. According to the nonprofit Center for Science in the Public Interest (CSPI) these dyes are linked to behavioral problems and hyperactivity in children.

Whether or not you believe that sugar or artificial dyes cause hyperactive behavior, there are other problems associated with too many sweets. Type 2 diabetes,obesity, and malnutrition can all be problems for children who eat too many sweets. A recent study has shown that nearly 50% of 7- to 8-month-old infants are already consuming sugary drinks and snacks. This percentage only increases with age.

The Centers for Disease Control (CDC) recommends parents make sugary snacks a treat, rather than a regular occurrence. Children should also be encouraged to consume fruits and vegetables more than packaged foods, and drink water rather than soda and sugary juices. Along with improving children’s eating habits, exercise and play should also be encouraged more. Children that are allowed time to run and play more often exhibit less hyperactivity behavior later. – Summer, Staff Writer