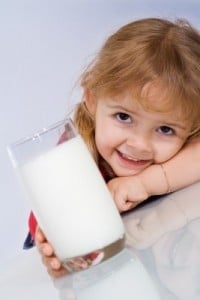 Cow’s milk is in nearly everything a child eats and drinks, from infant formula to chocolate bars. Yet some experts say all that milk is actually more harmful than good.

For many people, lactose intolerance develops after infancy. Their bodies become unable to digest the simple sugars found in milk, called lactose. The undigested lactose then builds up in the intestines, where it is broken down by bacteria and causes problems such as cramps and diarrhea. Doctors Neil Nedley and David de Rose saw this happen on a large scale when an US humanitarian shipment of powdered milk was sent to various South American communities. The people were not used to drinking milk beyond infancy, causing widespread cases of cramping and diarrhea.

Nutrition biochemist T. Colin Campbell agrees that cow’s milk may not be the best for children to drink. According to Campbell, cow’s milk may be a cause of Type 1 diabetes for some people. Campbells says that undigested lactose can release amino acid chains into the blood stream, causing the body to begin attacking it. Unfortunately, the lactose amino acid chains is similar to the cells of the pancreas that create insulin. When the body begins to attack the amino acid chains in the blood stream, it may then go on to attack pancreas cells by mistake. This can cause diabetes in infants and children.

Doctors Nedley and DeRose looked at several studies and found that only 25 percent of cow’s milk is actually absorbed by the body. In contrast, human breastmilk is much easier for an infant to absorb making it a better source of calcium and less likely to cause lactose issues. They feel that there are several health issues related to drinking or eating too many dairy products, including a higher risk of developing allergies, iron deficiency anemia, early atherosclerosis, juvenile diabetes, and hyperactivity. As well as many other possible milk-related issues.