Home » It’s a Baby Boy at the Ferry Terminal! 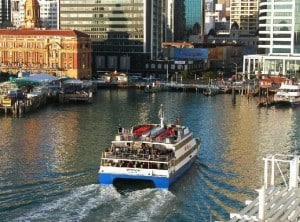 For Rachel Demchy, a Waiheke Island resident, ferry rides will always be associated with child birth. The new mom went into labor while expecting her first baby on a ferry and now, she delivered her second son, minutes after a ferry ride, right at the wharf terminal!

On Monday, Rachel’s water broke at 2.30 am and contractions began at 4.50 am. She and her husband, Waiheke RSA manager Brendan Demchy left home to catch the 6.05 am ferry when the contractions were ten minutes apart.

They hoped the eight minute ride would not be too long for them to reach the hospital, but the baby was not waiting.

“By the time we got to the wharf, an eight-minute ride away, they were only two minutes apart. By the time she had walked half the distance to the boat they were 30 seconds apart,” Brendan said to Stuff.

“I was on the phone to the ambulance who told me to find a place to lay her down to have the baby.”

Thankfully for the couple, there were many who stopped to help. Two nurses on the ferry also stopped and grabbed a wheelchair to help Rachel. Fullers staff member Michelle Neil opened the first aid room.

Rachel relates how the next tense minutes followed with nurses coming and going,

“Our midwife Linda Hodson was at the other end of the island so couldn’t get there. We had a midwife ready to meet us in Auckland but weren’t going to make it. One of the nurses saw a commuting midwife she knew, Juniper Tengblad, who got back off the ferry to deliver the baby. Then another midwife, Kirstin Kesting, arrived to take over so Tengblad could catch her ferry and get to work.”

“I couldn’t climb up onto the first aid bed so had him on the floor,” Rachel said

Joshua Demchy was born on a blue plastic sheet on the first aid room floor at the Matiatia wharf terminal at 6.25am.

But for his mother, this was not the first speedy delivery she experienced.

“Our first-born Caleb was born two months early. I went into labour on the ferry on the way to work. He was born three hours later. They say number two usually comes in half the time but this one wouldn’t even let me get on the ferry.”

The parents are overwhelmed by the support offered by everyone.

Brendon conveyed his thanks,

“To the commuters who stopped to check we were OK, the nurses and midwives, the ambulance guy Billy and Fullers staff.”

The family will surely expect more pleasant adventures during their future ferry rides.