Home » IUDs and Implants Best Birth Control Option, Even for Teens, According to Doctors 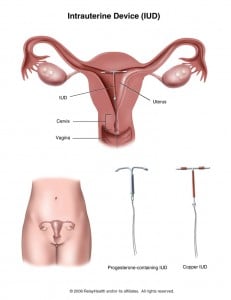 IUDs, or intrauterine devices, are small, plastic, T-shaped devices wrapped with either copper or hormones; all IUDs are transplanted directly into the uterus. Copper IUDs make the uterus an inhospitable place for fertilized eggs by altering the uterus’s chemistry. Hormone IUDs thicken the mucous lining of the uterus to prevent attachment of a fertilized egg.

Hormonal implants are matchstick-sized rods that contain levonorgestrel, a progestin hormone that prevents egg release from the ovaries. These implants can also increase the uterus’s mucous lining and impede the sperm’s passage to the egg. This type of birth control is implanted under the skin of the arm.

Yet, despite their effectiveness, IUDs and implants are rarely used by American women who wish to avoid pregnancy. In fact, only about 4.5 percent of 15 to 19-year-olds opt for the IUD, and even fewer use implants to prevent pregnancy. This may change, however, after a recent recommendation change made by the American College of Obstetricians and Gynecology (ACOG). They now say that IUDs and implants should be seen as “first-line” birth control options.

Previously, doctors were instructed to view the devices as good options; no partiality was noted when comparing IUDs and implants to other forms of birth control. But over the years, more and more data has shown IUDs and implants to be more effective at preventing pregnancy than pills, condoms and spermacides. What’s more, IUDs are long-term options that are fully reversible.

“There is a great deal of emerging data that these should be the top tier, the first line,” said Dr. Tina Raine-Bennett, research director for the Women’s Health Research Institute at Kaiser Permanente Northern California and the chair of the ACOG committee. “We’re saying to doctors ‘Here is compelling evidence that should guide your practice.’”

Unfortunately, some doctors may be more hesitant than others to recommend IUDs to their patients. Back in the 1970’s, an IUD called the Dalkon Shield faced multiple lawsuits after women who had received the implants claimed the device had led to pelvic inflammatory disease. IUDs have had a “bad reputation” ever since, and many older doctors are still afraid to recommend IUDs to their patients. But Raine-Bennet says that the concern over IUDs is outdated.

“That was one single brand, but it left a huge mark…” she said. “There’s still a huge misperception, more on the part of providers. Reproductive-age women now don’t even know what Dalkon Shields were…The risk of PID with IUD placement is 0-2% when no cervical infection is present and 0-5% when insertion occurs with an undetected infection.”

A shady history may not be the only thing keeping doctors from recommending IUDs and implants to their patients though; cost may also be a factor.

“The cost varies, but an IUD device itself is anywhere from $500 to $700,” Raine-Bennet said. That price doesn’t include the additional office visit and implantation fees either. When comparing that to the average pack of birth control pills, which can cost as little as $10 to $25, it’s not hard to see why many women opt for pills over other more long-term methods.

Of course, if you count the cost of an IUD or implant over time, the pills actually end up costing more. But if patients don’t have several hundred dollars to fork out for an IUD, they’re most likely going to go for what seems to be the cheaper alternative. This is often particularly true when considering younger women – those that would benefit the most from an IUD since they are the least likely to have the implant removed after only a short period of time.

A 2010 Guttmacher Institute study supports this theory. After giving a large group of women from St. Louis information on various types of birth control, the women were given the option to choose any form of contraception they wanted, for free. Two-thirds of the women opted for implants and IUDs.

Thanks to some changes in health care, the trend may be changing, however. The Affordable Health Care Act, which took effect last month, mandates that most insurance companies include all contraceptive methods as a part of their benefits packages. They are supposed to be offered with no co-pay. Unfortunately, younger women may still not find solace in the no-copay alternative, since they may be afraid to use their parent’s insurance for contraceptives.

Some physicians may also be concerned that an IUD or implant will give their patients a false sense of security regarding protection during sexual activity. This concern could be heightened even further when dealing with a younger female. However, inconsistency of use is the leading reason behind contraceptive failure, so an IUD may not actually be responsible for failure to use a condom. They could be the saving grace for someone who doesn’t use other forms of contraception consistently though, at least as far as an unwanted pregnancy is concerned.