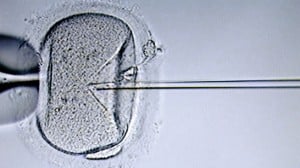 Fertility during adulthood is probably one of the last things a parent may think about while helping their child fight cancer. Parents may be informed, however, that fertility is likely to be lost, even in the youngest of cancer patients because of the treatments needed to kill the cancer cells.

In adults, eggs and sperm can be frozen cryogenically ahead of time. These can then be used at a later time to conceive a child via in vitro fertilization. But for the youngest of cancer patients, there just aren’t any options.

While a slice of their ovaries could be frozen and saved for later, their reproductive system have not fully matured yet, so the eggs are not mature enough to be preserved and used. And it’s not exactly plausible to give a young girl hormone therapy to preserve her eggs. There may be a development in the future, however, that can help even the youngest of cancer patients conceive nearly naturally later on in life.

At the University of Gothenburg, researchers recently discovered a chemical (PTEN) that triggered the maturation of small, immature eggs in mice. Published in the journal, PloS ONE, the study even went so far as to produce five live baby mice from some of those matured eggs, all of which were healthy and fertile themselves. This research has the potential to offer female cancer patients of any age an option for conception much later in life.

“This discovery demonstrates that there is a realistic chance of being able to use PTEN inhibitors to activate small eggs in a test tube,” said Kui Liu, professor at the University of Gothenburg’s Department of Chemistry and Molecular Biology. “This technique is extremely valuable for those women who have only small eggs in their ovaries and cannot be helped by IVF as things stand…We hope to see this method being used clinically within five to ten years.”

This particular study expands on previous results from the group in which PTEN was found to inhibit egg development. That results from that study were published in the journal Science.