Home » January Jones Steps Out With Her Little Astronaut

‘Mad Men’ actress January Jones was spotted grabbing some lunch at Rib Ranch Bar-B-Q in Los Angeles, California with a friend and her son Xander on Wednesday (June 4, 2014). 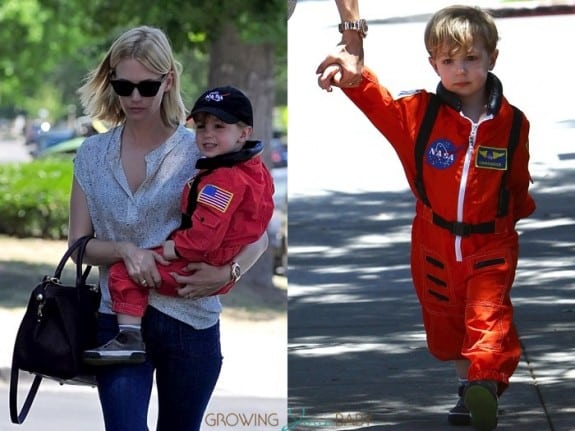 Cute as a button January’s son Xander was dressed up in Aeromax’s orange astronaut costume.

The night before the actress joined some of her castmates at the Awardsline and Deadline Screening of her hit show Mad Men held at the Landmark Theatre.

After seven seasons the show will wrap production this Summer.  And while the cast will film until July, fans won’t get to see the last 7 episodes until next Spring when the second half of the final season airs.

As January closes that chapter of her life, she will start the next one in a new home. January recently splashed out on a lavish $1.7 million house in a gated Los Angeles community, which comes equipped with a swimming pool, spa and a zip-line in the backyard.

Sounds like Xander has a lot of fun in store for him this Summer!