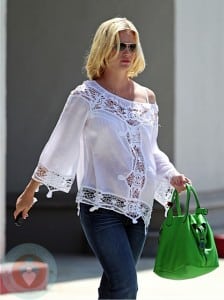 Congratulations to Mad Men star January Jones on the arrival of her first child – a boy!

During an interview in June the actress revealed that she wouldn’t be finding out the sex of the baby saying “it’s going to be a surprise for me.”

And while she spoke very little about the baby during her pregnancy, Mad Men creator Matthew Weiner is confident ‘she’ll take motherhood in her stride.’

He said: ‘She has wanted this very badly. She’s got a big heart and she’s been talking about having children since I met her, which is not always common with actresses.


‘I think she’s going to be an amazing mother,’ he said

January was often spotted out in LA running errand and staying fit while she was pregnant.  Here are some of our favorite shots of her!