Back in California after some time in New York City, January Jones was photographed taking her son Xander to the doctors in Los Angeles on Thursday. 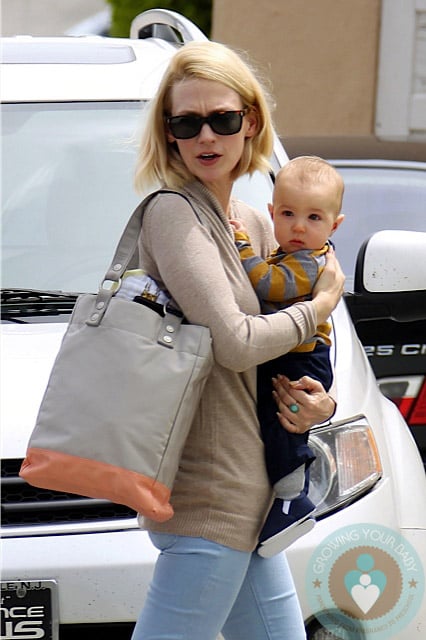 With the return of her hit show ‘Mad Men’ the actress has been doing a lot of press. Xander has been a hot topic and unlike in the past, the new mom has been talking about her parenting experiences. During a recent interview with Britain’s Grazia magazine January said she is having a lot of “fun” raising her son and thinks falling pregnant couldn’t have happened at a better time in her life.

“I am at the right age, the right time in my life, where having him is just so much fun. I think being a mother is something I was meant to do.”

January returned to work six months after Xander’s birth, but the show executives made it easy for her to transition back to work.

“I’m lucky to have a job where I can bring him to work, so I was still able to nurse him, and I could run over and squeeze him when I missed him, which was often.”

The actress is also quick to point out that she is very different from her ‘Mad Men’ character Betty Draper.

“I have nothing in common with Betty when it comes to mothering.

“I am enjoying myself so much, whereas I don’t think Betty sees the fun in it. she sees it as a burden and an inconvenience, she’s just not good at it.”