Home » Jay-Z and Beyonce Lunch With Blue Ivy in Toronto

In a rare sighting Shawn Carter(Jay-Z) and wife Beyonce were photographed leaving Italian restaurant Nervosa Trattoria in Toronto with their daughter Blue Ivy on Wednesday. 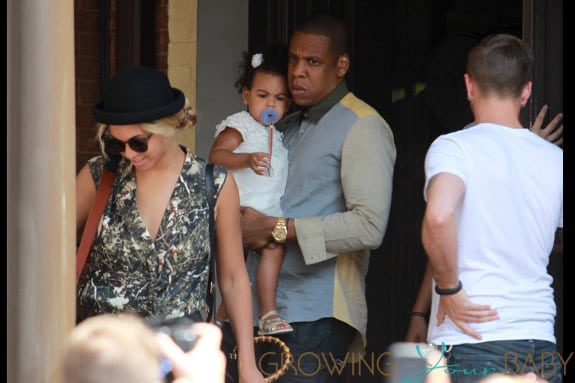 Jay carried his little lady while Beyonce led the way.

Currently on tour with Justin Timberlake, the rapper is in town as part of the Summer of Legends tour at the Roger’s Center.

The family has been on the road since April while Beyonce toured overseas as part our her The Mrs. Carter Show World Tour. This Summer they are both performing in different cities across North America. In fact, Beyonce was scheduled to hit the stage in Chicago just hours after their lunch date.

Beyonce will perform 15 more dates in North America before heading to the UK, Latin America, Australasia for 3 months.  Jay has 13 more scheduled dates with Justin Timberlake in the United States before he shifts his tour overseas in October.