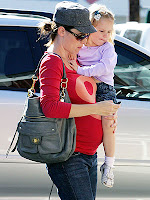 Jennifer Garner and daughter Violet headed out for lunch Tuesday at one of their favorite spots, the Brentwood Country Mart.

Ben reportedly put his foot down and said no way to trendy Hollywood names. If it’s a boy, he likes the name Benjamin, not just because it’s his name but it’s that of his hero, Benjamin Franklin.