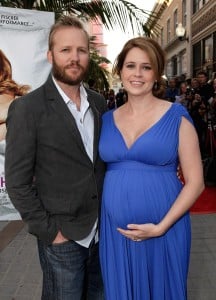 Congratulations to The Office star Jenna Fischer and her husband, Lee Kirk on the safe arrival of their first child – a boy!

US Magazine is reporting that Weston Lee arrived on Sept. 24. The actresses rep confirmed the news saying, “Mom and baby are doing great.”

This season Jenna’s pregnancy was written into The Office, with her character Pam expecting a son with TV husband Jim.

“Pam and Jim snuck away last season on Valentine’s Day, and they had sex. The story is that they conceived this baby at that time and were keeping it a secret until we come back from the summer.”