Home » Jennifer Garner Does The School Run With Her Girls!

Mom on the run! Jennifer Garner was spotted doing the school run with her daughters Seraphina and Violet Affleck in Santa Monica on Thursday February 10, 2015. 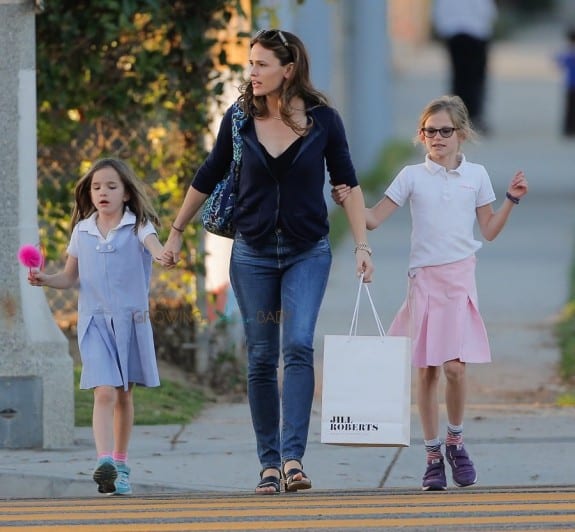 The busy actress carried Violet’s backpack and a Jill Roberts shopping bag as she strolled with her girls to the car.    Shortly afterwards, the trio reportedly met up with dad Ben for a low key dinner in Santa Monica.

Despite their plans to divorce, Jen and Ben have put on a united front for their kids, and are often spotted at the market or going to church together on Sundays.

For the past few months Ben has been filming ‘Live By Night’ in various cites all over the United States.  The most recent production was done in LA, which meant he was closer to his kids.

After taking a couple years off, Jennifer has been busy working on multiple projects over the last year.  Her movie Miracles From Heaven will hit the big screen on March 17th, and she will start work  on The Tribes Of Palos Verdes very soon. Ben’s Batman v Superman: Dawn of Justice will hit theaters one week later so the pair won’t likely overlap on their media tours.