Jennifer Garner was photographed on Friday with Seraphina, picking Violet up from karate in Los Angeles, CA on Friday. 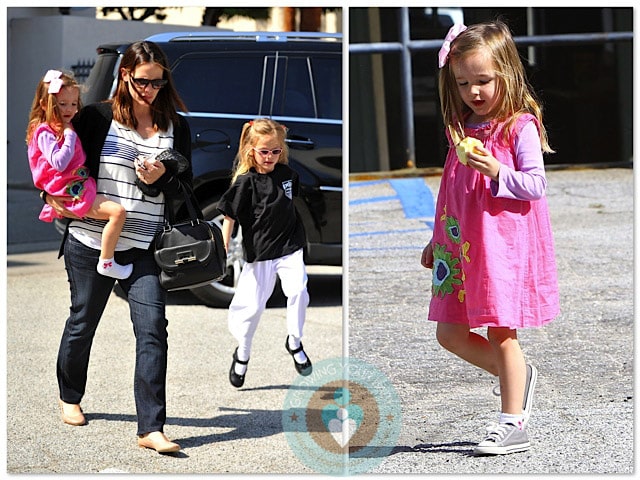 It has been a while since we have seen her taking her girls to their sports and activities. Because she was pregnant for most of last year, it has also been a long time since she has worked. But that didn’t stop CinemaCon from presenting her with the Female Star of the Year award on Thursday night. During her acceptance speech she admitted, however, that her mom was a little confused at to why she was receiving the honor.

“I told my mom the other day I was getting this award . . . and I was excited and feeling proud and thought she was going to be proud, and then there was this pause on the other end of the line. She said, ‘Jennifer, do these people know you haven’t worked in the last year?’ I said, ‘Yeah, I feel they probably know what I’ve been up to. I haven’t stepped foot on a set. You are correct, mom.'”

“She said, ‘Can they take this back? Because every time I talk to you, you are breastfeeding, you are running car pool, you are on the library committee — you are not acting!’ I said it’s not all about the now, it’s things you’ve done in the past or in the future, and she was like, ‘Honey, you have a weird job.'”

Rest assured Mrs. Garner your daughter will be back on the silverscreen in mid August when her new movie, The Odd Life of Timothy Green is released. Until then, we wait patiently to meet Samuel…