Yesterday Jennifer Hudson appeared on ABC’s ‘The View’ to promotes her new album ‘I Remember Me’ but was upstaged by her adorable little boy, David Jr. 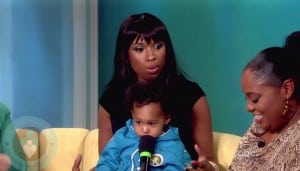 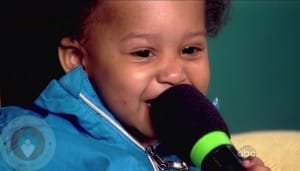 The toddler, who was unfazed by the cameras and audience sat contentedly on his mom’s lap holding a microphone and humming into it.

The actress told the hosts that she needed to bring him out because “he wouldn’t let me leave him”.

She then spoke about motherhood saying,

“I just learn from him, he keeps me smiling every day,” she said.

“I run out of space on my phone, trying to capture everything he does.”

Parenthood has also inspired Jennifer and her fiancé, David Otunga, to embark upon a healthier lifestyle.

“I wanted to give the example from the beginning – oh, Mommy works out, Mommy eats right”, she said.