Jennifer Hudson got a surprise visit from her son David on the set of a Weight Watcher’s commercial in Los Angeles on Sunday(April 15). 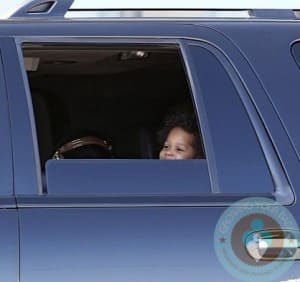 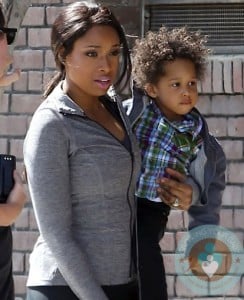 The actress was all smiles when she spotted her curly haired guy arriving with a friend in a blacked out SUV.

During an interview with Good Housekeeping in January she  revealed that she has lost 80lbs since joining Weight Watchers.

Her size, she told the magazine, caused her to lose many opportunities including a backup gig with Barry Manilow and possibly a finalist spot on American Idol.

Becoming a mom changed her perspective and her goals,

“Everything changed the day my son, David Jr., was born,” she says. “Motherhood brought tremendous responsibilities — but none greater than the obligation I felt to get healthy and be there for my son. David deserved to have a mama who could run after him without getting winded or getting tired, to have a role model who could teach him to make healthy food choices. I needed him to grow up with a mama who always would be there for him by caring enough about herself to take control of her health and her eating.”

Today Jennifer is a healthy size 6 and is on a maintenance plan.  Rather than working out every day, which was previous regimen, she does it four times a week. And she says she has become so accustomed to healthy eating that she’s lost the taste for the heavy fare of her youth, such as burgers.