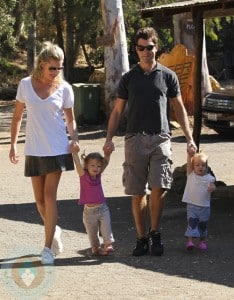 Actor Jerry O’Connell says two is enough. Now that he and wife Rebecca Romijn have their twins Dolly and Charlie, he doesn’t want any more children.

While at the People’s Choice Awards on Wednesday night the first time dad told USMagazine.com that the terrible two’s have done him in.

“My factory is not closed, but it’s finished!”

Raising the twins has been a bit of a struggle, especially when, whom he calls “the bad one”, throws a tantrum in public places.

He’s also not very good at doing their hair, which also leads to more conflict.

“Are they tomboys, I don’t know? They just don’t like getting their hair brushed. I can’t do it in public because people would think I am abusing my children.”

Now that the girls have started school, Jerry thinks more issues could be on the horizon,

“My wife went to pick them up and she couldn’t help but peek through the window.  She said one was doing very well and one wasn’t listening. Honestly if there was a pre-military school, I would send her immediately!”

Poor Jerry! He needs to do some playdates and hang out with other parents. His girls don’t sound too bad – just 2!