Jessica Alba is becoming well known for pushing some of the best strollers on the market. Over the last year she has been spotted out with a Britax B-Ready, the B-Agile, the Orbit G2, the phil&teds Dot, the Oyster and now the new Orbit Helix! 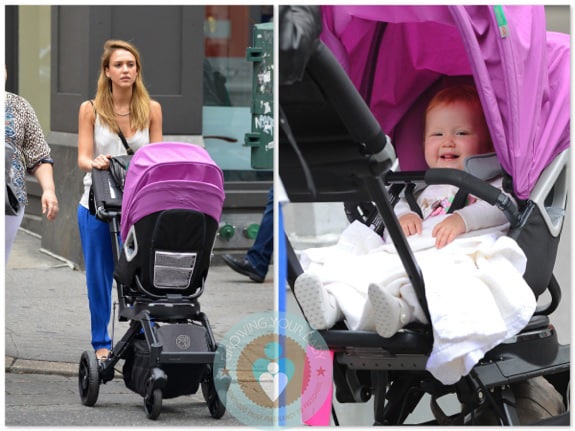 Just announced for pre-order last week, the Helix is one of the most anticipated strollers of the year.

Jessica and a smiley Haven were photographed leaving their SoHo hotel and then again while out for another stroll later on.

While attending the Environmental Media Awards on Saturday night the actress told Celebuzz.com that she struggles to balance motherhood and work.

“I don’t think I balance it very well.  I feel like I’m always compromising something, but my kids’ happiness [is] my priority. Everything else is secondary, and I just try to do my best.”

Jessica also admitted that having children has made her less critical of herself.

“I don’t really care about my body image anymore because it just doesn’t matter now that I have children. Instead, I focus on my health, feeling strong, and making sure I’m up and running so I can spend that all-important time with the girls.

“Becoming a mom has definitely made me feel more confident and secure than I ever did in my 20s. Even though I can’t ever get down to my pre-baby weight before having Honor, my jeans don’t zip up the same way, and things just hang differently, I feel completely comfortable in my skin and my idea of perfection has changed.”

I love that she is so honest. In a time when celebrities bounce back from childbirth in just weeks, it’s important for regular moms to hear that even women who have lots of help struggle with the changes of parenthood.