Jessica Simpson and her fiance Eric Johnson were photographed having a Valentine’s lunch date at The Ivy in Santa Monica on Thursday. 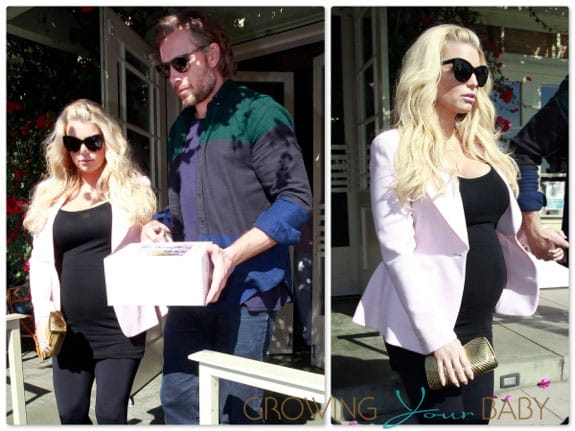 The singer, who is pregnant with her second child, dressed her growing belly in a black hugging tank and pink blazer.

Last month Jessica told Jay Leno she and Eric have tried twice to get married, but have been roadblocked by both of her unexpected pregnancies.

“We’ve had two different wedding dates, but he keeps knocking me up,” Simpson, 32, joked. “We’re doing it very backwards, I know. … I’ll just keep my legs crossed, I guess, this time.”

“Apparently it was a part of God’s plan for my life. I was extremely shocked because I was going through a lot of hormonal changes, trying to get back to the old, vibrant Jessica. You know, it was kind of like a one-night stand. And it happened, all over again!”

Her spontaneous life has, however, created great material for a new show she will be starring in about ‘a girl who keeps getting pregnant’.

“We don’t have a name yet,” she confessed to Leno. “We’re just now in the process of casting everyone, doing the pilot. I will be playing myself but we’ll have actors playing Eric and my dad. That’ll be funny.”