Home » Jillian Michaels and Heidi Rhoades Visit The Farmer’s Market With Their Kids!

Jillian Michaels and Heidi Rhoades enjoyed some family time together on Sunday at the Malibu Farmer’s Market with their children Lukensia and Phoenix. 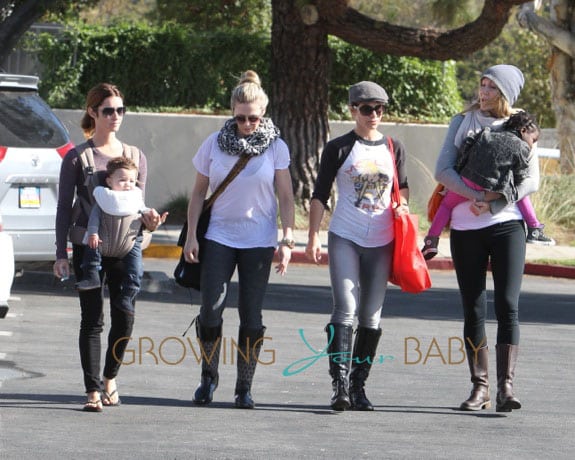 The moms were joined by some friends while they strolled through the market.  Heidi kept Phoenix close in an Organic Baby Bjorn Carrier, while Jillian and a girlfriend took turns carrying Loukensia.

After leaving the show for two seasons, Jillian will return to the Biggest Loser this January to help tackle childhood obesity.  In an effort to draw attention to the growing issue, the producers have chosen a group in their early teens, who cannot be eliminated and are not asked to go through the public weigh-in.

“As a former overweight teen, I know firsthand how dramatically weight issues can affect every aspect of a child’s life,” Jillian revealed to NBC “Having recently become a mother of two, I am more passionate than ever about helping empower children and families with the information and resources they need to live a healthier life.”

The show, Jillian says, has been consulting with ‘some of the top experts pediatricians, child psychologists to help us deal with this in the most delicate and appropriate ways.’

We appreciate the Biggest Loser’s commitment to fighting this epidemic, which will in turn, hopefully inspire kids all over the country to get healthy.