Home » Jon and Kate Catch Up With Oprah

Amidst rumors that they are headed to splitsville, Jon and Kate and their eight kids appeared on Oprah yesterday to update her on how things have been going and offer some advice to a family that is about to welcome quadruplets. 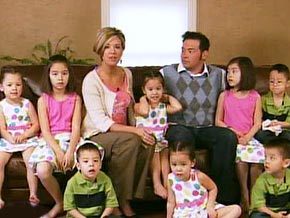 Since their last visit the sextuplets turned 4 years old and started preschool. The family moved into a new home and took a special trip to Hawaii, where Jon and Kate renewed their wedding vows in front of their eight children.

During filming for their popular tv show, Kate keeps some semblance of order in their Pennsylvania home by having everyone follow a few strict rules.

Jennifer and Kevin, a couple from San Antonio, Texas, appeared via Skype to ask Jon and Kate for some advice. Jennifer is pregnant with quadruplets—two boys and two girls—and the couple already have two other children!

“I would say it’s definitely doable,” Kate says. “As our babies were coming home, I remember when we got up to four—we brought two and then one and then the fourth one home—things started to get a little hairy. But I’ve always said, ‘Between us, we have four arms.'”

Kate says parents of multiples may also need more time to bond with each child. “I can honestly say, looking back, it took a full year until I felt solely and completely bonded with each of my babies,” she says. “You don’t have enough time in the day to sit and do that bonding.”

While there’s never enough time, sleep or money, Jon says he wouldn’t change a thing. “That was our decision [to keep all the babies], and we would never take it back ever,” he says. “Never regretted it.”

In addition to the advice and update, Oprah also posted a lengthy excerpt from the couple’s book Multiple Blessings.