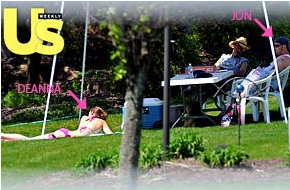 According to US Magazine, the Jon Gosselin cheating allegations have been confirmed by five people close to the situation – including two relatives of the other woman.

Yesterday Deanna Hummel(the other woman) told People Magazine that she and Jon were just friends.

“It’s absurd that anyone would think otherwise. We just talk and socialize, the normal things you do when you see friends.”

Today, Deanna’s older brother Jason gives US Magazine blow-by-blow details of the pair’s relationship. He says he is speaking out now to set the record straight and to protect his naive sister.

“She’s a nice girl, not a homewrecker,” Jason told the mag. “He is a bad liar. This isn’t healthy for her. But she is refusing to help herself, so here I am trying to help her myself. I hope this clears the air.”

After Jon and Deanna met in mid-January at Chill Lounge in Reading, Pennsylvania (they sent each other $3 shots), Jason says Jon began relentlessly pursuing his sister. By mid-February, he was coming over to their Reading house.

On April 26 – while his wife Kate was traveling – Jon had Deanna over to sunbathe in his family’s front lawn (see photo, left). This was just seven days after they had first been photographed together at Legends Lounge at 2 a.m. in pictures that show he is not wearing his wedding band.

At the Hummel house, Jason says Deanna and Jon would

“pretty much stay locked away like two teenagers. It was weird. He’s a grown man.”

“A lot of the time, it was pretty, um, gross listening to her, you know, um — how do I say this? The walls are thin. Let’s just say that. I mean, no one wants to hear his sister having sex, let alone with a married dude who’s, like, almost twice her age and who has eight kids and a maybe-crazy wife. Ick. Nast.”

I feel like money is causing this brother’s conscience to clear. I’m not sure what to think…