The Duggar family is growing again! Just a couple months after TLC’s 19 Kids and Counting star Jill Duggar announced she was expecting a baby, Josh and Anna Duggar have revealed they will also be expanding their family in 2015. 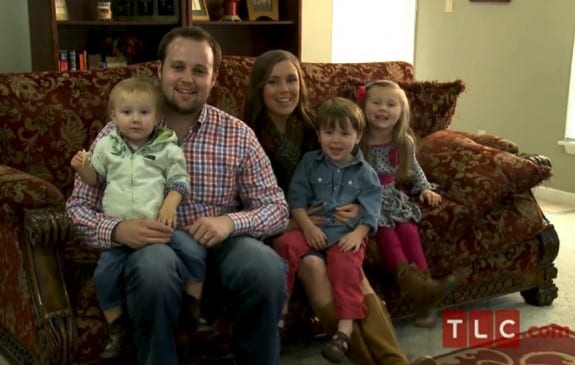 The couple, who married in 2008, are already parents to 5-year-old daughter, Mackynzie Renee, and boys Michael James, 3 and Marcus Anthony, 1.

Last year Josh told E! News that he’s not looking to follow in his parents footsteps by having 19 children, but they’re not ruling it out either — just leaving it up to God.

“It’s really not about the number of children you have, but how well are you doing with the children that God has given you. We’re really just going to take it one at a time. I don’t think you can say we’re going to set out and say we’re going to have five kids or four or three. We have no control over that. God has the control.

“Obviously, we can do things to prevent that, but I’m glad my parents didn’t just settle to have three or four children. There are definitely a lot of advantages to trusting [in God]. Anna’s glad that her parents didn’t stop at four, because she was number five.”

In an exclusive interview Anna told TLC she is 9 weeks pregnant and she is having a lot of morning sickness.  The couple shared the news with the rest of the family after Ben and Jess’s wedding.

This pregnancy is a little different for Anna because they lived in Arkansas for the previous three and she had support from their family there.  This time around they are looking at whether they will deliver at the hospital , a birthing center or possibly at home.

Congratulations to the couple and we look forward to following their journey!