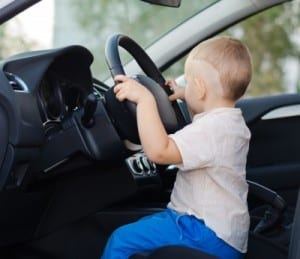 The joyride of two young boys came to a screeching halt after they wrecked the car into a metal post. Thankfully, neither of the boys were injured. However, the children were detained for a short time by the two Dutch officers that had found them.

“A police patrol this morning saw a car with the doors open and two young boys stood next to it,” police spokeswoman, Lenny Beijerergen told AFP on Saturday after the crash and detainment. “The seven-year-old boy told police that he had driven the car around one-and-a-half kilometers (one mile), hit a metal post on the pavement and came to a standstill…This is really quite remarkable. I’ve never seen anything like it. Seven is very young.”

Substantial damage had been done to both the car and street they’d crashed on. An officer tweeted a photo of the scene they’d driven up on – boys, crashed car, and all the debris strewn on the residential street. But the photo was soon removed.

The car reportedly belongs to the boys’ grandmother and was driven by the seven-year-old. And while it seems he failed to think of the biggest safety issue (not driving a car until you can see over the steering wheel and have obtained a permit or license), he did remember to buckle himself and his brother.

“At least I had my seat belt on! And my brother was in the child’s seat,” the seven-year-old driver had said when officers turned up, national news agency ANP reported.

Since neither of the boys were injured, officers took the youngsters to the police station. Beijerbergen said “the boys were…given a talking to and made aware of what [they’d] done.” They were then taken home.