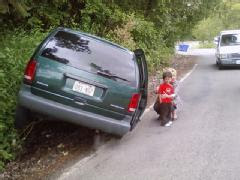 A 4-year-old boy’s brief joyride in his family’s minivan came to an abrupt end when he crashed into a ditch Friday afternoon.

The boy’s mother told police that the clever pre-schooler used a stool to retrieve the keys off a key rack in their apartment. He then unlocked the van, started the vehicle and put the vehicle into drive.

According to a witness, the boy accelerated the van and drove 100 feet before turning left into a ditch. The witness called 911 and helped the boy out of the van, fire officials said.When firefighters arrived, they found the back of the minivan sticking into the air with the rear wheel off the ground, said Capt. Mike Zainfeld in a press release.

The boy wasn’t injured and the van sustained minimal damage. Luckily, there was no property damaged during the boy’s drive.

The parents won’t be charged, the police said the embarrassment of the incident was punishment enough.