A UK mom has great timing! In fact her timing is so good she managed to give birth to 3 babies, all born years apart, at 7:43. Amazingly the births of Lowri Dearsley and her partner Matt Rigbys three children Ella, Evie and Harrison have all gone like clockwork. 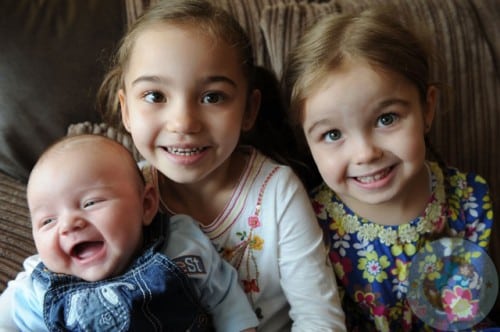 The trend started on October 10, 2005, when eldest Ella was born at Salford Royal Hospital at 7.43am. Two years later Evie came along on December 26 at exactly the same time but 7.43pm. And if that wasn’t punctual enough on January 20 last year the couples baby boy Harrison was being delivered at the same hospital – and the unbelievable happened.

As shocked doctors and midwives watched the clock on the wall they were all stunned at the time Harrison chose to arrive – 7.43am. Mom Lowri, 26 said

“It was amazing when Harrison was coming because the nurses and the doctors all knew about the time the girls had been born.  The doctors had to induce me at 5pm on January 19.  And then, after 14 hours of labour, Harrison was finally on his way. Matt said, ‘Oh my God, I can’t believe this!’

“I was something of a celebrity afterwards. People were all talking about it and I said to a nurse, ‘It’s a shame we didn’t have a bet on it’.  I didn’t have a dream or premonition about the numbers before the girls and Harrison were born, but now Matt and I both have tattoos with the numbers on our arms.”

Matt also revealed that the couple have now changed their regular lottery numbers to include their children’s birth time.

“Sadly we haven’t won yet with those numbers. But who knows? It’s worth a go. Maybe we will win three times.

“People see my tattoo and ask me what the numbers mean. When I tell them they can’t believe it.”