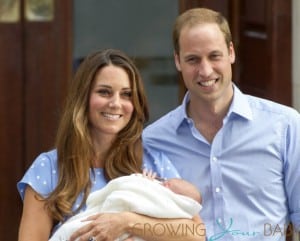 New parents PRINCE WILLIAM and CATHERINE, DUCHESS OF CAMBRIDGE left hospital with their new bundle of joy on Tuesday evening (23Jul13), a day after the royal baby arrived at London’s St. Mary’s Hospital.
The royal couple greeted fans and the media on the steps of the Paddington hospital. William smiled and waved as his beaming wife cradled their child in her arms. She then handed the baby boy to her husband and the pair stepped out into the street to speak to reporters.
Prince William said, “He’s got a good pair of lungs on him, that’s for sure. He’s a big boy, he’s quite heavy and we’re still waiting on a name; we’ll have that soon.”
William and Catherine left the hospital hours after her parents had visited the new mum. Catherine’s mother, Carole Middleton, told reporters gathered outside St. Mary’s that the royal baby is “absolutely beautiful”, and added that both her daughter and her grandson were doing “really well”.
With his son in his arms, Prince William told the media that he and his wife are “very emotional” and the Duchess added, “It’s a special time”.
The royals headed back into the hospital to collect their things and emerged minutes later to head home, with Prince William jumping behind the wheel of their car.

**Only Available for publication in the UK and USA**