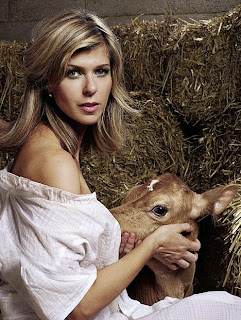 In an ad that some would find disturbing, Kate Garraway attempts to make the point that she doesn’t think that giving human milk to a calf is any more shocking than giving cow’s milk to a baby.

“I’d gone into the film thinking, ‘Why are they doing it? Is it because it’s easier than breastfeeding themselves?’ They threw it back and said, ‘No, we’re not doing it for convenience, we’re doing it totally in the interests of the child, and we’re prepared to sacrifice our ego of having that role.’ ”

She had always known, she says, about the nutritional superiority of breast milk.

“From the second you’re pregnant, they tell you that breast milk can do anything from cure conjunctivitis to send your child to university. If it could put the kettle on, it would make you a cup of tea, kind of thing. So I knew that.” But her reasons for breastfeeding her own daughter had been purely psychological.

“I went back to work, albeit part-time, relatively early at three months, and I just felt it was really important to me, when I came in the door and Derek’s mum had been looking after Darcey all morning, emotionally I could push her to one side – mum’s here now – and it was something only I could do. That bond was really emotionally important to me, and so I would never have been able to let someone else breastfeed her in a million years.”

When she explained this to the women in the documentary, however, they told her it was the most selfish thing they’d heard.

“They said, ‘What you’re entirely thinking about is your role as a mother, and your mental state, you’re not thinking about the child at all.’ These were clever, interesting women – and they said, ‘That’s all about you, not the child.’ I’d never thought about it like that before.”

The biggest point made in this article is that the women or ‘wetnurses’ believe that it is more beneficial to have someone else breast feed your baby after you go back to work than feed your child milk from another species – formula (from a cow).My issue with this is that your milk is made for your baby. You know what you eat and that is what the baby gets through the milk.

You have NO control over what others do when they are not looking after/breast feeding your child.

There is no way for you to know if you child is getting painkillers, specific medications or even alcohol because this person’s milk is not being screened, as done in a milk bank.

Would I allow someone else to breast feed my baby? NO! After my son decided he was done with my breast, I continued to pump for him for 10 months after. To me it was just the right thing to do.