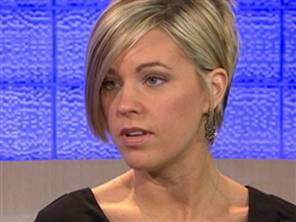 Kate Gosselin spoke to the Today’s Show host Meredith Vieira this morning about the new affair allegations and her hesitancy to believe that Jon cheated on her.

The mother of the eight tiny stars of “Jon & Kate Plus 8” vowed Thursday to survive the tabloid firestorm that has erupted after US Magazine published photos of her husband and another woman.

“We just need to weather this storm, just like all the other storms that we’ve been through,” Kate told Meredith. The tabloid attention and paparazzi have come as something of a surprise to her, she added.

Kate was originally scheduled on the show to talk about her new best-selling book “Eight Little Faces,” but she spent much of her airtime talking about the allegations. Jon and the eight kids had been scheduled to appear with her, but as controversy continued to swirl, the family decided Wednesday that it would be better if Jon stayed at home with the children.

Instead, Jon sent a statement to Today denying the charges that he had an affair with 23-year-old Deanna Hummel, whom he met in January in a Reading, Pa., bar. Hummel also denies that the two are anything but friends.

“These allegations are false and just plain hurtful,” Jon said in his statement. “As I adjust to the attention that comes from being in the public eye, I need to be more careful and aware of who I am associating with and where I am spending my time. But the bottom line is, I did not cheat on Kate. I am sorry for putting my family in this awkward position, given some poor decisions and bad judgments I’ve made recently. I am working through this difficult time with my family. My family is my top priority.”

When asked about the current story in US Magazine Kate told Meredith she was taking it all with a ‘grain of salt’.

“Tabloids pay thousands of dollars for stories. The juicier the story, the more the payment. When you pick up those sort of magazines, is it believable? Ask yourself. People are being paid to talk.”

Meredith asked the busy mom if the allegations are going to be part of the show.

“We’re dealing with it privately. It’s kind of ironic to say that, because we do have a reality show. People see the good, the bad and the ugly. But there are those things that we keep to ourselves. And we’re working through it together, and that’s the important thing,” Gosselin replied.

Kate admits she understands the tabloid fascination with her family, she says it’s not pleasant.

“I’m not going to sit here and say I enjoy it,” she said. “I tend to be very thick-skinned. We all know that. It’s hurtful for the sake of my children, looking through their eyes, seeing the things that are out there. It’s absolutely not a bit enjoyable. But we’re learning as we go along. I’m really focusing on our kids. Everything I do is for them.”

She said her second book, “Eight Little Faces,” was written for her 8-year-old twins and 5-year-old sextuplets. The book features two-page picture spreads of the children. Each spread is accompanied by some words from Kate and a relevant Bible verse.

“I honestly don’t care if either one ever sells one copy,” she said. “I’m flattered and thrilled that they both hit the New York Times best-seller list, but certainly that was not my goal or my focus. I want my kids to have in writing how I feel about them, and how I may not have planned for them, but they are so the best eight things in the whole world.”