A newly single Katie Holmes was spotted headed out with her daughter Suri and some friends for a playdate in New York City on Thursday(July 5). 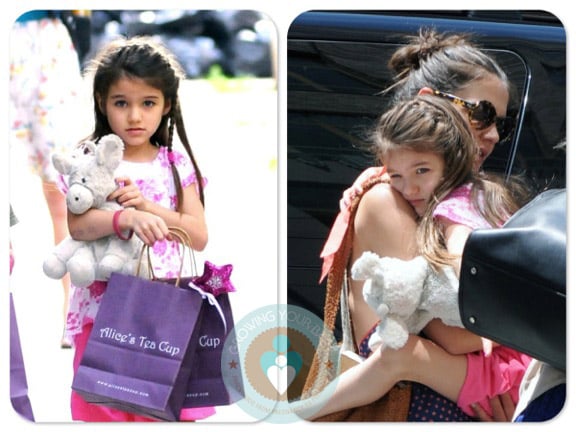 Just a week after it was reported that the actress had filed for divorce from her husband Tom Cruise, Katie looked confident as the cameras followed her and Suri on their day out.

After laying low in her new apartment for a few days Katie emerged on Monday to film a guest spot on Project Runway and then again the next night to treat Suri to a late night ice cream date.

On Thursday the group of three kids visited The Children’s Museum before having lunch at Alice’s Tea Cup.

Katie made Suri’s day by buying her a star wand, book and feather headband at the cafe’s shop.

“Suri was extremely happy,” an onlooker told Us Magazine. “She was looking at everything behind the counter and literally said,’This is the best day ever!'”

Since her split from Tom Katie has worked to shed her former life.  She changed apartments,  hired a new security detail and changed all of her phone numbers.  It is not know what caused the sudden split from her husband of 5 years but is clear she wants to do this on her own.