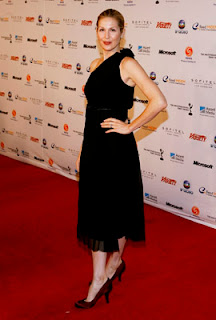 Gossip Girl star Kelly Rutherford, 40, and her entrepreneur husband, Daniel Giersch, announced today that they are expecting their second child in June.

The couple are already parents to two-year-old son, Hermès.

Noting that he has bonded with everyone, the mom-to-be said,

“We have such a nice set because people bring their kids and their dogs. It looks like we’re running a doggy daycare in the makeup room, it’s really something.”

She added: “”I don’t bring him as much I used to because he’s having so much fun at his classes during the day!”