Home » Kelly Rutherford Opens Up About Her Custody Battle 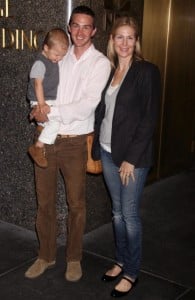 A Summer Vacation visit has turned into an international custody battle for Kelly Rutherford.

The news of her custody battle broke on Tuesday after a judge ruled that she would have 50/50 visitation with her ex-husband Daniel Giersch. The catch, however, was that she would have to travel to France to spend her time with the kids as Daniel is not allowed is the United States because of visa issues.

While speaking to GMA on Saturday morning the actress said that she will not give up fighting to get her children back.

“They’re my babies and they’re very young and this is going to affect them profoundly and I want to be there as much as I can to show them that this isn’t my fault, this isn’t something I wanted, and that’s my concerns,”

On Friday, Kelly appeared in court to request her kids, Hermes, 5, and Helena, 3, be brought back to New York while she appealed Tuesday’s legal decision, but was denied.

“They went away for the summer to visit their dad and now all of a sudden they are starting school in France, so I think it shocked everyone,” Kelly told GMA

Because Daniel shares 50/50 custody with the Gossip Girl star, but can’t travel to the U.S.,the children must live with him.

“I’m all for 50/50 and all for children having a mother and father and co-parenting – it’s just that the way it’s set up now – I’m a working mother. I’ve been the sole supporter of my children for their entire life. I have a job, so … I’m going to do my best to be there obviously every chance I get, but I can’t just be there on a regular basis when I have to work,” she said. “I just can’t pick up and go, you know, that easily.”

The actress is hopeful that she will get a legal break soon. Her rep told US Magazine,

“Kelly is grateful for the outpouring of support from her friends and legal experts who are shocked that American citizen children can be ordered to live in France simply because their father is banned from entering the United States. The children are scheduled to start school in New York next week and Kelly is hopeful the judicial system will expeditiously reverse this stunning turn of events.”