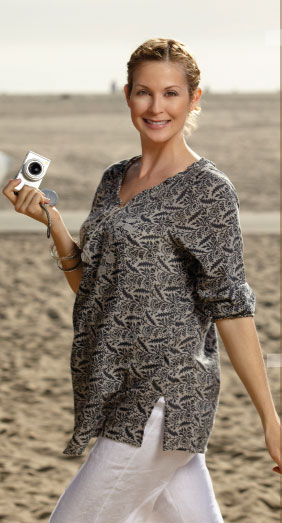 Gossip Girl’s Kelly Rutherford gets the cover of this month’s issue of Pregnancy Magazine.

The actress talks to the magazine about her birth plan, motherhood and preparing Hermes for his new sister.

How are you doing?

I’m doing good, I’m doing really well. Since we’ve been in New York, I’ve been working and my tummy’s getting big. She’s movin’ around a lot in there. I’m excited to get back to LA and have the last few months off before I give birth. That will be nice. So I’ll focus on that.

I’ll be done at the end of March and then I can go back to LA and get everything ready for the baby and then I don’t have to come back until July, the baby’s due the first week of June and then I’ll go back to work some time in July. So that will give me enough time to rest and regroup and all of that.

What’s your plan for the birth?

I’ll probably have my mom there and Hermes will be close by and I’ll get a baby nurse too. And I haven’t had, I don’t know if I’m going to do a doula this time, I probably will. I usually labor at home, I’m very close to where I give birth, the hospital and my doctor is so lovely he usually comes to the house and checks on me and everything. It just depends on how this one goes. With Hermes it was a little bit longer, I labored at home a long time before I even went into the hospital and I just try to do it as naturally as possible and be as comfortable as possible. You think you can prepare, but nothing can prepare you for the first time you give birth for that experience because it’s just so extraordinary. So at least now I know a little bit more about what goes on, so I’m excited.

I’ll probably have a doula. I had a doula with Hermes and she was so helpful through the process and I’ll probably call her again when I get back to LA and see if she’s available. Cause it just helps, I think no matter who’s there by your side whether it’s your mother, your husband, whoever, there’s something nice about having that neutral party because they can help and keep everyone else around you together. And they know what’s going on, especially if you’re like me and you kind of want to do a lot at home, it’s nice to have someone that’s knowledgable around. 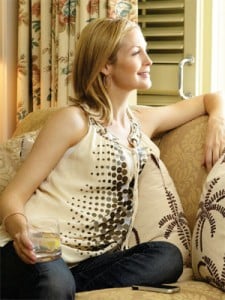 Does Hermes know what he’s in for?

He does, he’s in and out of it. Sometimes he gets it and he’s into talking about it and sometimes he’s like, “Let’s not talk about that yet.” So we’ll see, I think he’ll be a great older brother. He loves to explain things, so I’m sure he’ll have fun explaining to her how things are, how things work. And I just plan on including him in everything and that’s what my mom did with me and my brother, and I have a great relationship—I was an older sister—so I kind of know and she just really encouraged me to help and be a part of it. And I still do, I’m still probably too much in my brother’s business!

What’s your favorite thing about motherhood?

The smell. The smell thing is huge. The first thing I have to do when I see him is smell him. I just have smell him and kiss him and hold him. It’s kind of t hose instinctual things I guess or just seeing him do something new. Now he’s making sentences and he wants to see everything and point everything and show me what it is. It’s like rediscovering the world again.

What’s your biggest challenge as a mother?

The most challenging thing for me is not to worry. Because there are so many things you think about and worry about and I think it’s natural. And I talk to my girlfriends and they all do it, so I think, “OK, it’s not just me.” Cause sometimes you think it’s just me, I’m just overly worried about things. You want to do the right thing. There’s always an element of you want to do the right thing, am I doing the right thing? I just really try to follow my own instincts and say okay, at least if I follow my own instincts one way or the other I can be accountable for it.