In 2006 Modern Baby Company Boon introduced a genius stuffed animal storage bag that doubles as a lounge space when it’s full. This is the perfect solution for parents who have kids with a ton of stuffed animals. Because we are short on space this bag has been on my radar for some time and after seeing it in action at a few trade shows, I decided that we should give it a try.

In anticipation of our animal bag’s arrival, I gathered all of our stuffies from bookcases, cabinets and shelves. It was a big pile, which made me wonder – could this small bag hold all of these furry creatures?

It seems that every time there is a special event some one gives one of my boys a stuffed animal. Over the years we have amassed quite a collection. 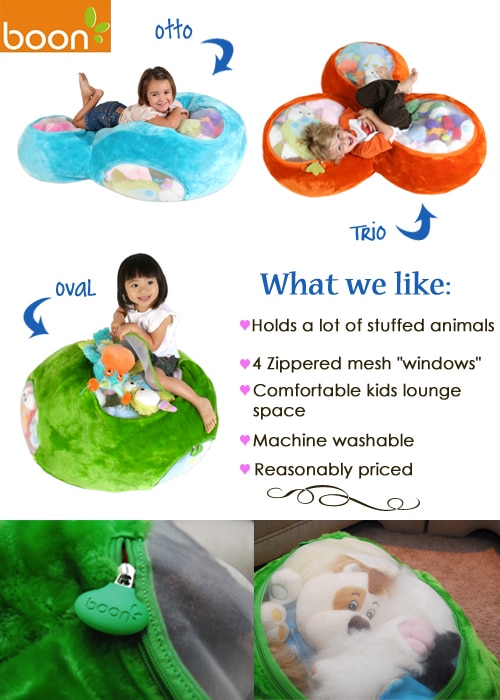 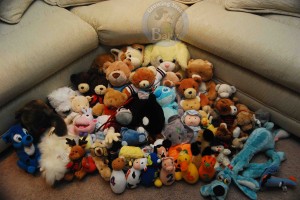 On arrival, the boys were really excited about this bag. When I opened it up and they saw the bright green fluffy exterior they wanted to jump on it right away.

Immediately I went to work throwing all of the bears into the bag. Amazingly, they were barely making a dent. So I went into our room and collected up some teddys I had from when I was younger. Still not full. Downstairs to the basement – getting there. It wasn’t until I had emptied every basket, bin and tote that I had filled the bag. Seriously? Every time I thought I had filled it up the boys would lay on it and make more room.

In the end we managed to stuff 10 large, 11 medium and 29 small bears into our animal bag, which was exciting for all. Them because it was a new place to play, me because all of those bears had been taking up precious space all over my house and now I was able to re-organize.

It was also nice that even though some of their best friends were trapped behind a mesh screen, if you position them properly they can always see them, thus displaying that they are ‘safe’.

I HIGHLY recommend Boon’s Animal Bag to any parent who is looking to free up some space around their house. It’s double duty also makes an ideal gift idea as well.

For those who have more stuffed animals than us, there are sizes above our bag that will hold many more bears.