One of the sweetest toys I have come across for little girls is the Disney Carriage Play Center.  This self contained doll playspace opens up to reveal a dream bedroom fit for a princess. 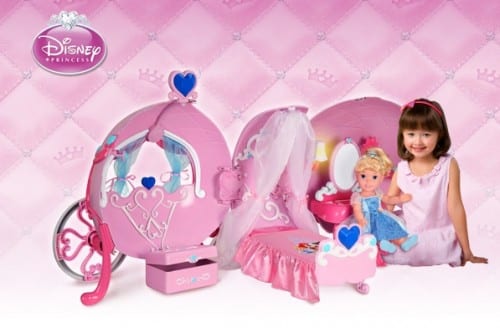 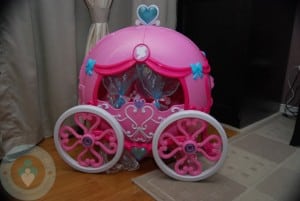 From top to bottom, assembly on this carriage takes about 25 minutes and a screwdriver is necessary.  Once I had unpacked the box I was a little nervous that the whole thing would take a while but was pleasantly surprised when most of the pieces either clipped or slid together. There also aren’t any stickers to apply as all of the detailing is painted on.

After it was assembled I couldn’t get over how cute this whole set it.  Jakks Pacific has done a great job designing a playcenter that is modeled after the center piece of one of Disney’s most popular movies.

Closed, it is a fairy-tale carriage, opened it is well appointed room complete with a canopy bed, a mirrored dresser and a working light. Jakks has also added a storage chest that sits under the window and a hanger to hold a couple outfits.  To complete the set a 14″ Disney Princess toddler Cinderella doll has been included.  What would a Royal carriage be without Cinderella? 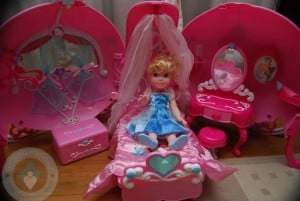 As soon as my niece laid her eyes on the carriage she was thrilled.  After we explained that she couldn’t sleep in the bed, she moved onto the doll that came with the set and carried her all day. Even thought she’s 2, there aren’t any parts that I would consider choking hazards so we thought it was safe for her to have.

This playcenter is also nice because your little one can play all day and then you can just pack the whole thing up and store all of her little accessories inside, reducing the clutter.

If asked, the only change I would make would be to somehow make the carriage roll.  As soon as the kids got it, they all tried to roll it around the kitchen. And while it does move, it doesn’t roll, which is what they were expecting.

I would recommend the Disney Carriage Play Center to any parent looking for a gift idea or something special for their little princess.  It is adorned with jewel accents and frills  – everything that makes most little girls happy!