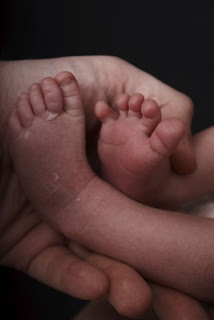 When Alana Sanders visited her doctor a few days ago he told her, not to expect her new baby for about a week as he was still high up in the womb and hadn’t dropped yet.

Some pain the next morning that was confused with constipation caused her to realize her fourth child was going to arrive sooner than predicted. With her husband out on his early morning paper route, there were only the three older kids aged 11, 9 and 2 at home to assist her.

“They didn’t freak out; they didn’t fight with each other,” she said. “Even my 2-year-old was calm.”

But even before the paramedics could arrive, less than 10 minutes after Jabari called 911, baby Joseph arrived weighing a healthy 9lbs 4ozs.

“There was so much going through my mind,” Sanders said of seeing her newborn, who landed on his back on the floor. “Was he breathing? Was he OK?”

The family’s ordeal was not over yet. Joesph’s unexpected arrival caused his umbilical cord to snap, leaving a foot attached to him. It was at this moment that older sister Faith, followed the careful 911 operator’s instructions and cleverly tied a yarn loosely to the chord to prevent the baby from loosing blood.

I was afraid if I tied it tight something (bad) was going to happen,” Faith said.

The paramedics, dad Geoffrey Sanders and his mother soon arrived and took mom and newborn to the hospital where the baby was given a clean bill of health. Proud of her very brave kids all Alan could say later was,

“It’s still not real to me that I gave birth to my baby in my bathroom, I’m just very grateful that my kids were there.”