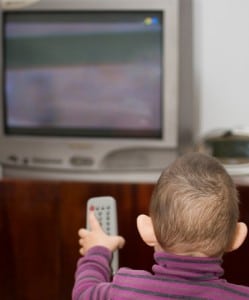 A new study published in the Archives of Pediatric and Adolescent Medicine shows that despite efforts to curb junk food advertising, kids are still seeing an abundance of unhealthy foods on TV. This seems to be higher for African-Americans than white children.

Researchers looked at the amount of ad exposure children had between 2003 to 2007. During that time frame, the Better Business Bureau launched the Children’s Food and Beverage Advertising Initiative that was designed to limit the amount of unhealthy foods children were exposed to. Some companies, such as Coca-Cola and Kraft, promised to limit their advertising aimed at children. Yet even with this effort, kids were still being flooded with junk food advertising.

Some advertising did lower. Children between 2-5 years saw 41 percent fewer advertisements for soda and candy. That same age group though saw an increase in convenience foods, the majority of which are unhealthy and lacking in nutrition. Older pre-teens and teens saw an even greater amount. African-American children saw the biggest unhealthy difference.

“African-American children and teens had more than double the rate of increase in exposure to fast-food ads compared with their white counterparts,” the study reads.

“Despite the industry’s self-regulatory system, the vast majority of food and entertainment companies have no protections in place for children,” Margo G. Wootan, nutrition policy director with the Center for Science in the Public Interest, told The New York Times of the initiative.

Previous studies have found links between TV viewing and obesity rates. Currently, the average American child watches an average of 3 1/2 hours of television per day. The more advertising children see for unhealthy foods, the more they want to eat those foods. -Summer, staff writer