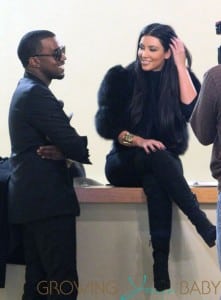 45705, NEW YORK, NEW YORK – Monday December 31, 2012. FILE PHOTO dated Monday October 4, 2010. BABY JOY FOR KIM AND KANYE!! Hot couple of 2012 Kim Kardashian and Kanye West have a announced that there expecting their first child. The couple have been dating for over eight months and before denied pregnancy rumours but Kim is thought to be around the 12 week mark. The news was revealed by Kanye last night on stage during a concert in Atlantic City, the rapper said ‘stop the music’, make noise for my baby mama right here’. The news sparked a host of excited and stunned tweets. Grandmother to be Kris Jenner was first stating ‘Oh BABY BABY BABY!! and sister Kourtney added ‘Been wanting to shout from the rooftops with joy and now I can! Another angel to welcome to our family. Overwhelmed with excitement!’. **ORIGINAL CAPTION** Kim Kardashian and her sister Kourtney are spotted filming scenes for their new reality show ‘Kourtney & Kim Take New York’. Ryan Seacrest, who is the executive producer of ‘Keeping Up With the Kardashians’, announced the new show today, through his Twitter account. The sisters filmed a scene inside of a NYC store with Kanye West and Kourtney’s boyfriend Scott Disick. Photograph: © PacificCoastNews.com **FEE MUST BE AGREED PRIOR TO USAGE** **E-TABLET/IPAD & MOBILE PHONE APP PUBLISHING REQUIRES ADDITIONAL FEES** UK OFFICE:+44 131 557 7760/7761 US OFFICE:1 310 261 9676