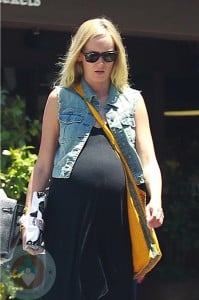 In April it was revealed that Kimberly was expecting her first child with actor Benicio del Toro.

“Kimberly is pregnant. Benicio is the father and is very supportive. Although they are not a couple, they are looking forward to the arrival of the baby.”

US Magazine reports that Rod, 66, and his current wife Penny Lancaster-Stewart were at the hospital during Kimberly’s delivery as was Alana Collins, who is Kimberly’s mother and Rod’s first wife.