Kourtney Kardashian and Scott Disick were photographed out on Saturday(December 22) with their children Mason and Penelope at The Commons shopping center in Calabasas. 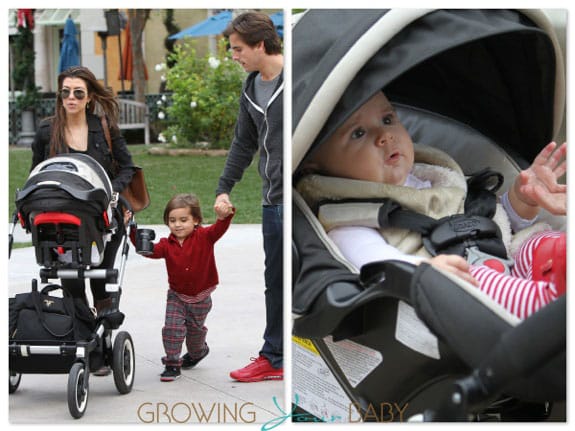 The family is fresh home from a 4 month trip to Miami where they were filming Kourtney and Kim Take Miami.

Life & Style Magazine reports that while in Miami Scott attempted to propose to Kourtney again but was turned down for a second time.

“She didn’t allow for an engagement to be filmed,” shares a Kardashian insider. “They did not film a proposal, and it was because of Kourtney. She said, ‘No.’ She does not want to be engaged.”

The scene was a repeat of 2010, when Scott attempted to propose to Kourtney during a dinner at Le Cirque.

“Kourtney really has been very vocal and told everyone how she does not want to marry Scott,” a friend reveals to Life & Style. “She does not think their relationship is perfect and is scared of divorce. But Scott’s not happy about her never saying yes to a proposal.”

During an interview with Jimmy Kimmel earlier this year Kourtney revealed she had commitment issues.

“First of all, I have realized that I have major commitment problems during this pregnancy. I’m really claustrophobic, and all my issues — and I have a lot of them — they all stem from this thing. I can’t commit to anything . . but I love Scott, and he is my partner.”

Adding, “We are committed to each other, we are together, we have a great partnership — I don’t think I’m any different than Khloe and Lamar.”

The reality star pushes her princess in a Bugaboo Donkey stroller.