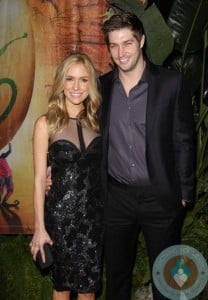 “We are thrilled to welcome Camden Jack Cutler into the world. He was born this morning weighing 7lbs 9oz. Everyone is doing great!”

Camden is the first child for the pair who have been together off and on since 2010. There is no word whether the baby arrived in Los Angeles where Kristin lives or Chicago, where Jay has been training with the Bears for the upcoming season.

Offensive lineman J’Marcus Webb tweeted his congrats and allegiance to the quarterback on twitter,

The new dad won’t have long to spend with his little guy. The Bears play their first pre-season game on Thursday night. They will be home for 2 weeks and then travel to New York and Cincinatti after that.

We look forward to meeting the new addition.  Congratulations to the pair!